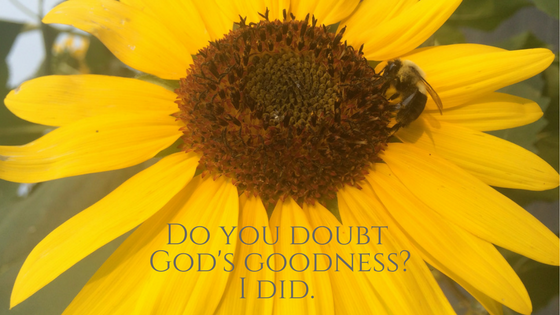 It wasn’t God’s sovereignty or faithfulness that I questioned when my dad died; it was God’s goodness that I doubted. Did God know my pain? Was He aware of how devastated I was? How does a good God allow such suffering to happen to a good person?

Fall was my dad’s favorite season of the year. He was the one that cultivated my love for all things Fall. My dad’s birthday is also in the Fall; so, every time it rolls this way, it is common to find me thinking about my dad and missing him terribly. Just a few weeks ago, my mom brought me an Ancestory.com kit wanting me to participate in her newest activity of researching our family tree, I was a little annoyed. Then she said, “You are the only one with dad’s DNA.” I was stunned. This was a thought that had never crossed my mind.

My mom and I were standing in the kitchen watching the leaves fall down in the wind when she talked to me about Ancestory.com. My heart was deeply missing my dad. My dad taught me how to enjoy Fall and all its glorious colors when I went deer hunting with him as a child. I did not hunt, but instead spent my time bundled up in bright orange clothing inside a Smurf’s sleeping bag next to my sister. We were either napping or eating trail mix, with my dad high above us in a tree stand. When we were awake, we had a very important job – to watch for deer.

In the silence and stillness of those crisp Fall mornings, I remember feeling at such peace. My eyes would scan across the land looking for movement of any kind. But I would often get distracted looking across the land, and would look up at the leaves instead. I loved watching them fall down around us in what appeared to be a place as magical as Narnia. But the colors of the leaves – that was my favorite thing to hunt. I would lie underneath that big tree where dad was posted and name all the colors in my head. Then, I would try to pick a favorite tree with the most splendid display of colors. The color would change as the sun would rise, and I would start the joyous task all over again.

Memories of Fall mornings with my dad are still fresh in my mind, even though these moments are well over 25 years old. My sister and I were gifted by the Lord to have a dad who was always active in our lives. He did things like show us our first sunrise, take us hunting, attend a ridiculous amount of sporting events, show us how to write checks and balance a checkbook – being part of what appeared to be normal, mundane days filled with his presence and his love.

Dad was a hardworking, intelligent, “Mr. Fix Anything” kind of guy. And He loved the Lord and seemed most at rest while in God’s creation exploring the great outdoors.

While I grieved different losses along the Lou Gehrig’s disease road, nothing could have prepared me for the day he departed this earth to go home to heaven. I had always thought that on the day he died I would find great relief – not just for him, but for me and my family, especially my battle-worn mom, his bride. Nothing could have been further from the truth. His death was a crushing blow.

I was consumed with thinking about all the future events he would not be at: monumental milestones like walking me down the aisle, helping fix my first house, holding his grandchildren. I also found myself missing him in the everyday of life. The rhythm of the machines buzzing in the house that helped keep him alive were suddenly missing. The silence was deafening.

The inward focus on my pain and sorrow took over as my eyes came off of God and focused onto myself. Hurt and grief turned into anger at the world, and especially at the Creator of it all. I didn’t doubt that God was in control or on His throne, but I didn’t believe He could be good in the midst of such deep sorrow.

Over many years, friends would meet with me and open the Word of God with me and for me, and enter into my anger-filled heart. With eyes set on myself and not on the Lord, I had started to believe lies and not the Word of God. People must have been praying for me during these years because by God’s grace, I continued to attend church and small group Bible studies, while still holding onto my hurt and anger.

Over time, the Word of God started to melt away the anger and expose the lies I was believing. The Word of God is powerful enough to do the work of God, and that is exactly what happened to this hard heart. The Word revealed that God did not design death as part of His original design, but it came as a result of sin and of the fall (Gen. 3). Every word of Philippians brought life and exposed sin that needed to be repented of and brought before the throne of God. I read the story of Lazarus (John 11), where Jesus knew his friend would die and He would bring Him back to life, and wept in such a way that he was sobbing uncontrollably. I finally saw that Jesus knew my pain. Jesus suffered greater pain than I will ever know when He was on the cross, separated from His own Father to bear the sins of the world so that I might know Him, escape eternal death and live with Him and for Him.

The Word melted away my anger and revealed God’s character, and I could not deny God’s goodness any longer.

As I watch the colors of Fall change all around me, I still miss my dad. But God’s goodness is more evident than the pain and sorrow. My heart now sings:

“Give thanks with a grateful heart.

Give thanks to the Holy One.

Give thanks because He’s given Jesus Christ, His Son.”

Won’t you join me in singing and telling God how good He is. As we walk toward Advent, there is no better time than to reflect on God’s goodness in our lives.

I was not paid by any company mentioned in this post. 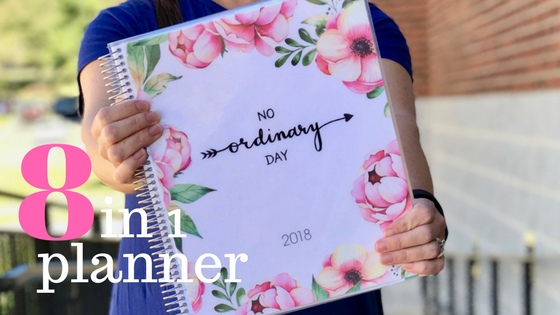 I used to be notorious for overcommitting myself and my family. This left not just me frazzled, exhausted and weary for the next week, but even my family!

This happened the most when I didn’t use a paper planner. Nothing against our digital age and the ease it provides for some routines. Schedules and items that need my attention stick better in my brain when I actually take time to write them down on paper. I had finally learned that I function better with pen and paper.

When I write schedules & commitments down, and I see it all in front of me, it is easier for me to see where we are overcommitted, where we need to back off and when we can take family adventures, even if it’s just a picnic in a park. Let’s face it, mom life is hard. Why should I make it harder on my whole family by overcommitting our time and making everyone a tired, emotional mess? Including me!

Write out everything you’ve committed to for the week.

This is a habit I’ve had for a long time, and its benefits are countless. Every Sunday night after the kids go to bed, I write out what is happening in our families lives and when for that week.

I try my best to meal plan for the week during this time. We have learned as a family that when we don’t meal plan, we are more likely to eat out and spend more money than our budget allows for food. While this piece is not my favorite, it brings peace to my mind and helps us avoid confusion to know what’s for dinner ahead of time.

This is wisdom passed down to me that has proved itself extremely helpful and healthy for our family. As mom, I’m the timekeeper for our family. For our family, when we have something every day, we are a worn out bunch before Friday. And friends, that is not a pretty picture in our house. It means exhausted kids and parents, later bedtimes, earlier mornings and usually a good dose of unnecessary drama and tears because we are more tired than we realize.

Just because you see an empty hour or two in your days does not mean you have to fill them up. These are margins of time that should be left unplanned and empty. The margins allow for the unexpected to happen – whether good or bad – and provides flexibility for us to navigate them with less stress than if we didn’t have margins. When the school project takes longer than expected, or that one ingredient was forgotten at the store. Another trip to the dentist is needed to repair braces, or a friend needs you to pick up their kids from school. Without the margins, the unexpected can leave you frazzled and frayed.

And if those unplanned hours remain unfilled, enjoy them!

What is most important to you? Is it reading time with your child? Maybe having that lunch date with your spouse? Is it completing your Bible study? Or learning a new discipline like Scripture memory?

Yes, plan for those! Make time for what matters most.

If we write down what is most important to us, we plan for that time. We find ourselves protecting it.

I write down in my planner a daily reminder to have a quiet time. This is not to have a box to check every day and feel good about myself, but it’s a reminder that I need to spend time with my Creator and Maker. I need to be in the Word of God putting my eyes and mind on the One who knows me and knows all things.

My sweet Lee is constantly reminding me, just because it’s good doesn’t mean you should do it. And you know what, he’s right. Just because I can or because I have a little bit of time, does not mean it is best for me or for my family, even if it appears to fit in the margins of life.

All of these points led me to create The No Ordinary Day Planner, an 8 in 1 tool to help make the most of my days. I wanted a planner where I could write all our commitments down as a family, but would also help me to surrender these plans to the Lord and to walk with my eyes focused on Him.

Having all of these tools in one place is just what I needed! After using this planner for a year, I have grown in my walk with the Lord, better managed our families’ calendar and time, and I have found myself praying something I never did before, “Lord, teach me to number my days that I may have a heart of wisdom.”